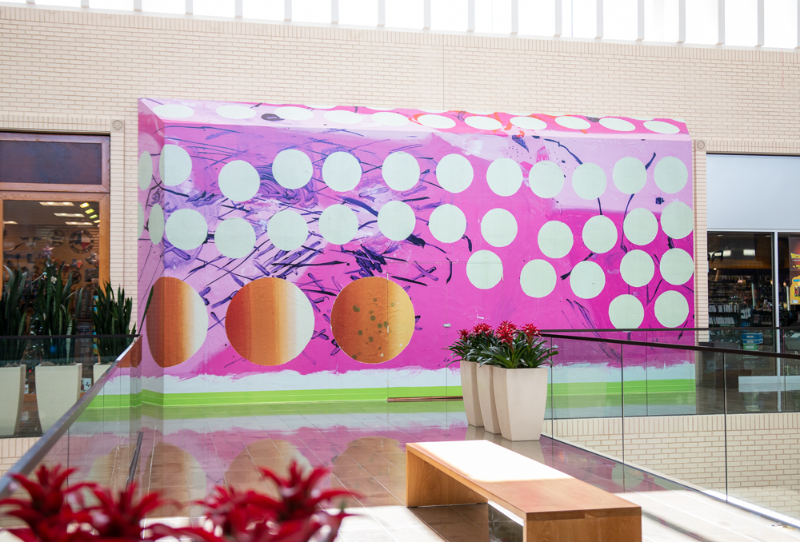 The colorful, abstract art of Pop Up Project artist Shane Tolbert is steeped in illusion, history, and visual metaphor, and you can see some of it at NorthPark Center on two storefront barricades between Nordstrom and Macy's.

“They are massive, and the print quality is insane,” enthuses Tolbert on the phone from Santa Fe, where he lives and works. “They are so sharp.”

Though Tolbert’s works look like they could have been composed on a computer, the original paintings were done by hand through a long and complicated process.

“It’s a painting but there’s very little brushwork,” he explains. “You don’t exactly see my hands in a work, which makes a digital reproduction all the more interesting because it removes my hand one more time.”

Instead of painting on canvas, Tolbert transforms discarded objects, such as styrofoam, cardboard, and plywood. He’s attracted to their scars — a gouge here, a gear imprint there.

“I started to paint on those surfaces because I like going into a painting that already has a language embedded in it—the scratches and dings,” Tolbert says. “The object has a past life, and now I’m becoming part of it by repurposing it.”

But he doesn’t paint directly on it. Instead, Tolbert thins and spread acrylic paint onto a giant plastic sheet, allowing the color to drift and pool. After it dries, he cuts precise shapes from the plastic and applies them to the found substrate, using a bit more paint as a fixer.

“The paint stays on whatever surface I apply it to, and it leaves the surface texture of the plastic sheeting,” he explains. “I’m able to freeze a moment in time. It still looks liquid, wet, in motion.”

Both Red Composition and After Elsie are color field compositions that incorporate crisp circles. The globes were inspired by Tolbert’s studying of the moon at Ghost Ranch, the New Mexico retreat that was Georgia O’Keefe’s home and studio.

“I like going on hikes in the winter during the full moon,” he says. “It’s bright as day. I would get up there and lay around in a sleeping bag and track the moon in the night sky. These orbs that kind of arc and dip and then stack…grew out of that.” 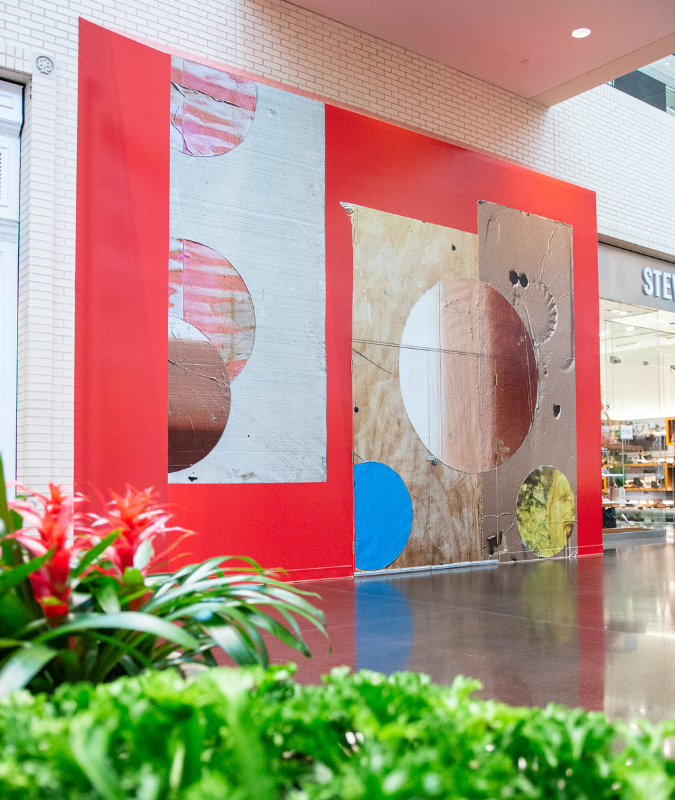 Red Composition comprises two paintings that Tolbert placed side by side atop an attention-getting red background. The striated earthy colors in some of the circles were inspired by the layers of rock in New Mexico’s landscape, he notes.

After Elsie is an interpretation of a child’s drawing of one of his paintings.

“Anytime I can take these steps to take the work in a new direction, that’s how it opens up for me,” he says.

Tolbert grew up in Corsicana and holds an MFA from University of California, Santa Barbara. Fittingly, his first experience with museum-quality art was at NorthPark.

“We went every year for back-to-school shopping and Christmas shopping,” he recalls. “Early on, that Frank Stella outside Dillard’s captured my imagination. I have distinct memories of staring at that as a young child.”

Tolbert’s work has been exhibited at Contemporary Arts Museum Houston and will be shown by McClain Gallery at the Dallas Art Fair April 17-19.

“It’s an interesting way [for NorthPark] to collaborate with artists and create space for them to have a large audience, because traditionally they are siloed into gallery spaces and things like that,” Tolbert reflects. “To be in a public sphere and have the opportunity to do something creative, there is so much potential.”

For more information on Shane Tolbert and other featured artists, visit The Pop Up Project landing page.